skip to main | skip to sidebar

Catching With a Vintage Baseball Glove 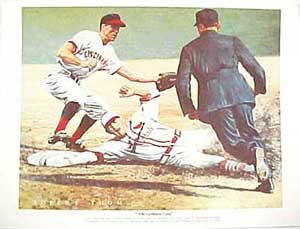 I spent most of the baseball seasons from 1974 to 1979 either playing baseball, poring over my baseball cards, reading about baseball, or daydreaming about baseball. I thought back then that if there were any justice the universe, someone who loved baseball as much as I did would have to be a big leaguer some day. Well that did not happen but I continued on as a fan until I lost interest finally during the steroid era. Since I have had only a lukewarm interest in baseball for the last ten years or so, I from time to time quip that I have forgotten more about baseball history than most people know. I believe this to be literally true.

When my daughters expressed an interest in playing fastpitch softball recently, my interest in baseball was rekindled. As I played catch with my daughter I realized how much I loved and missed baseball. Not so much the modern game, where most players hideously wear their baseball pants down over their socks, but the game before the modern glove, say, before World War 2. I had been a Yankee fan for most of my life but I had always been captivated by the picture of the sliding Pepper Martin of the 1934 "Gashouse Gang" St. Louis Cardinals that hung on my bedroom wall. That picture captured the raw, hustling, and fun style of play I loved and tried to emulate as a skinny shortstop for the Thatcher Men's Club team of the Elmira Small Fry baseball league. So in my rebirth as a baseball fan, I decided that it was the St. Louis Cardinals for me. Again, I am not as much a fan of the modern team but of the 1934 World Series Champion team. My favorite player on the team is Joe Medwick. He was also Yogi Berra's favorite as a youth growing up in St. Louis.


The evolution of the baseball glove has always fascinated me. Just looking at an old glove that is so small and has not even got stitching between the fingers makes one wonder how those old timers caught a ball with those things. On the other hand, I was always contemptuous of the modern "peach basket" gloves that emerged during my youth and are still going strong. They just seemed like cheating to me. So I simply had to buy a vintage glove and try it for myself. I won a Joe Medwick autographed model on ebay. What follows are my observations on catching a baseball with a vintage glove.

My first observation is catching with vintage glove requires a more heightened level of alertness than a regular glove. Playing with a modern glove is fun but can be a pretty nonchalant venture. One needs to be on his toes and two hands should be used on every catch possible with a vintage glove or you will drop a lot of balls. 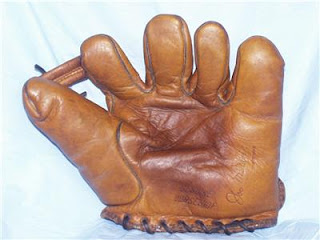 Next, vintage gloves can hurt. My hand swelled considerably after catching about twenty balls tossed underhand in to the air. This taught me that catching a baseball with a vintage glove was very much like catching a football: catch with two "soft" hands taking momentum off the incoming ball by easing it in toward your body and quickly get it into your throwing hand. If ESPN calls great fielding plays "Web Gems" because most great catches are made in the web of the modern glove, then great plays with a vintage glove should perhaps be called "Palm Pearls".

Finally, it is clear that there are balls that would be easy catches with a modern glove that will not be caught with a vintage glove. Chances that come in low to the backhand side are the toughest to deal with.

Catching and throwing a baseball is one of life's purest joys. There is nothing wrong with a modern glove, but every baseball lover should experience catching with a vintage glove. It is pure bliss. 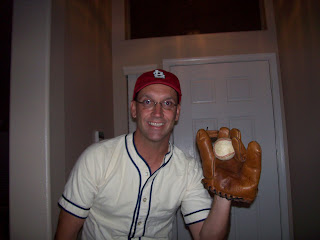